What is "se" in Spanish? 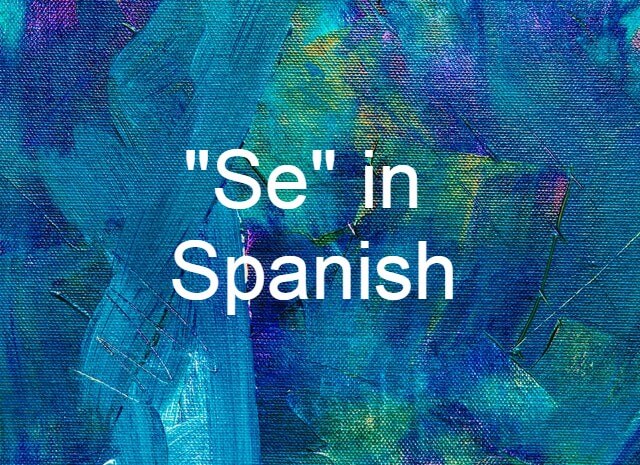 What an interesting word se is! It can be so many things, it's a shape-shifter, and a big nightmare for many of you.

A reflexive se would be translated as himself,herself,itself or themselves a lot of the times.

However, it doesn't always have a translation, as it can be the case of a pronominal verbs, and those need it for other reasons. Read this post to understand pronominal verbs better

It can also be a reciprocal pronoun translated as "to each other":

Se miran – They see each other

Se las pintan - They paint them to her (We're replacing both the nails and her, so we need both pronouns).

If you don't know what an indirect object is, read this post.

We don’t know who the subject is, there is a generalisation that can be translated as "one does/people do".

The verb doesn't change, it's always "it form".

It can have no object (thing or person), just an action.

Or with a person with a

It's a bit like "something is done" we don’t mention the subject either, but in this case the verb can either be "it" or "they".

Se venden muchos apartamentos – A lot of apartments are sold (by people)
We use "venden" (they) because it's "apartamentos" plural.

In this case there is a "what" or a "who" (in this case without the a in front of it), so right next to the verb:

Se aprueba una hipoteca cada día en este banco - One mortgage is approved each day in this bank.
We use "aprueba" because it's "una hipoteca", singular. If it was hipotecas it would be aprueban.

Some common phrases with passive se:

Practical tip: Don't worry too much about the terminology with impersonal and passive, the important thing in the practice is that if there is a thing or a person without an a before it (so is directly touching the verb), you need to consider if that thing or person is plural, and if so, make the verb "they form" too.

No se enseña a los niños empatía en el colegio - Kids are not taught empathy in school. - person with "a" in front. The verb stays in "it form" although kids are plural.

Se vieron muchas personas en el concierto- Many people were seen at the concert. - There is a person, plural, and no a before it, so the verb is plural too.

Se organizan los documentos cada año - The documents are organised every year. - there is a thing in plural (the thing people organise), so the verb is plural too (things never have an "a" in front so I don't even need to think about that).

Identify what type of "se" it is:

The four ways to use "mientras"

Maybe you're familiar with mientras, but you might be missing a couple of useful ways to use it. Let's…

What is the difference between "algún" and "alguno"? And "ninguno"? What exactly is "cualquiera"? Are they all translated as…