Comparing in Spanish - as much 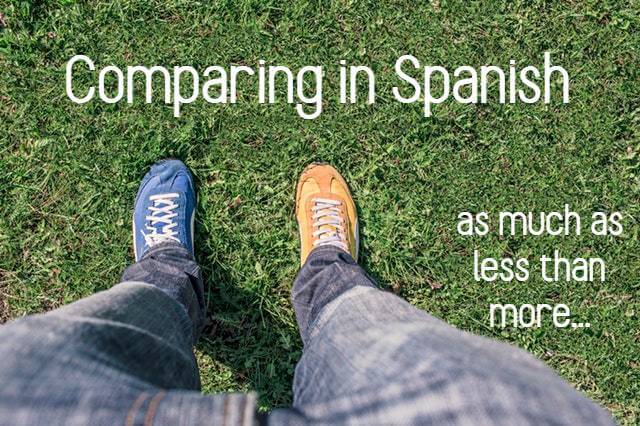 "Comparison is the thief of joy" said someone once! But sometimes it's just an useful tool to use when we speak, right?

Let's see how we compare in Spanish! Starting with recaping more and less:

Sometimes they will go together, sometimes there'd be something in the middle... there's no rule about this you follow the same order as in English.

Ex:
- Él conduce más que yo - He drives more than me. - Nosotros somos más amables que ellos - We are kinder (more kind, literally) than them.

It works the same way as "more than"

Ex:
- Tenemos menos problemas que tú -We have less problems than you. - Lee menos que yo - he/she reads less than me*

This one expresses that there is the same level of something on both parts.

It changes depending on what we compare:

This way, we agree this word with the thing of whose amount we talk about, which is a "noun" and it goes right in the middle.

Did you notice that we don't use que anymore? Now we use como, when it's equivalence, meaning "as" in this situation.

For more meanings of "como", see this blogpost.

Ex:
Hay tantos niños aquí como allí - There are as many children here as there.

Tienes tanto miedo como yo - You have as much fear as I.

A slightly different case we have when using just tanto and no noun, for a generic "as much", still about quantity but without specifying or being particular.

Ex: Tengo tanto como tú - I have as much as you.

This could be the intensity or frequency of an action.

To do something as much as ...

Notice that this last one is in negative, so in practice there's no equivalence anymore, as it means the same as "you guys run less than us" but because we phrase it this way it doesn't matter, we still follow these rules.

In the middle, there's always an adjective / describing word.

You might have noticed that when we compare we use the subject pronouns (yo, tú, él...).

That's all for today!
Hope it helped! :)

"To meet" and "to know" in Spanish

There are two different ways to say "to meet" in Spanish and two to say "to know", and they…

Quedar is one of those amazing verbs you can do a lot with! Let's see all of the versions…