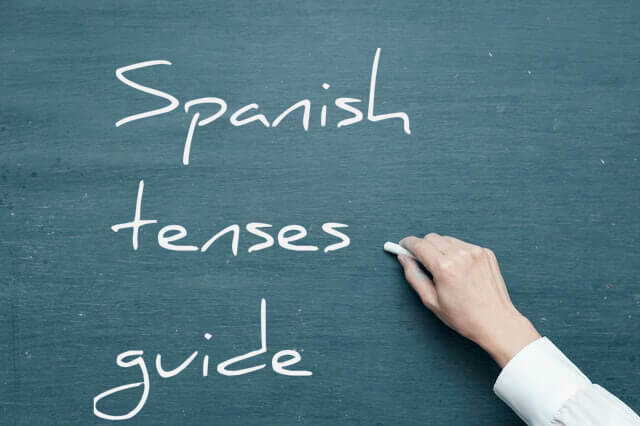 Do you want to understand better what each verbal tense is for in Spanish? Do you want the big picture?
Keep reading!

Also, in all cases there is a link to another post/video where you can learn how to form it, see irregular verbs, etc.

I'm talking about indicative tenses, so if you want to learn more about subjunctive have a look at these two posts:

Ex:
Normalmente me levanto a las ocho y media - I normally get up at 8:30.

Nunca aspiro el interior del coche - I never hoover/vacuum the inside of the car.

Mi familia vive en una ciudad y yo vivo en un pueblo con mi marido - My family lives in a city and I live in a town with my husband.

NOTE: In some cases it can be translated as "someone is doing", if you think the translation is better in that context. For example:
Lleva una chaqueta - he/she wears or is wearing a jacket.

Translation: I am doing

When a tense is "continuous" we use a gerund "-ing word", so we get more specific with the action.

In present tense that means "I am doing" (right now, in this moment), but I could also do a past continuous "I was doing" (in that moment, right then), or future "I will be doing" or conditional "I would be doing".

We use estar (to be) in whichever tense we're using (present, in this case) and then a gerund.

In the past I'd usually use estar in imperfect:

Estaba trabajando a las 5 - I was working at 5.

You use that same patter for other tenses ( estar in future, in conditional, subjunctive...)

Find out how to form gerund, including the irregular ones to make a tense "continuous".

Translation: I'm going to do

Of course the line between what's soon and what's not is thin, so we're a bit flexible but think of the period of a few months into the future maximum.

Vamos a ir de vacaciones en mayo - We're going to go on holidays in May.

Near future grid, video and practice.

Translation: I will do...

If + something happened (imperfect subj) + I would (conditional)...

Possible combinations with "if" in Spanish.

Ex: Si tuviera más espacio tendría un gimnasio en casa - If I had more space I would have a gym at home.

Ex: Te ayudaría a pintar pero no tengo tiempo - I would help you paint but I don't have time.

Ex: Podría ir a correr hoy pero no me apetece ir - I could go running today but I don't feel like going

Me gustaría tener un perro algún día - I'd like to have a dog one day.

Translation: I have done

Esta mañana me he duchado con agua fría - This morning I have showered with cold water.

¿Alguna vez has ganado un premio? - Have you ever won a prize/award?

Translation: I used to... (generally, but not always)

Cuando iba a la universidad, iba en autobús - When I went to uni, I went/used to go by bus*

El hotel era muy bonito y tenía una piscina - The hotel was very beautiful, and it had a swimming pool.

Pensé que era demasiado ruidoso - I thought that it was too noisy (second bit in imperfect, describing in the past).

Cogí mis libros y empecé a estudiar - I took my books and I started to study.

Me di cuenta de que mentiste- I realized that you lied.

Fui a ver "la llegada" y me encantó - I went to see "arrival" and I loved it.

Past preterite: regulars and some irregulars, grid, video, practice.

Finally, a post on when to use preterite and when to use imperfect and also another one on the difference between the three different past tenses.

That's a lot of information! Hopefully all of that can help you with your tenses,

now I can only say ¡buena suerte! / Good luck!

SOLER - I usually do

¡Hola! Today we're going to check out this verb, soler, that is very useful! Soler could be translated as…

Sometimes, practice can be a bit more fun than usual. This is a fake news video on the effects…